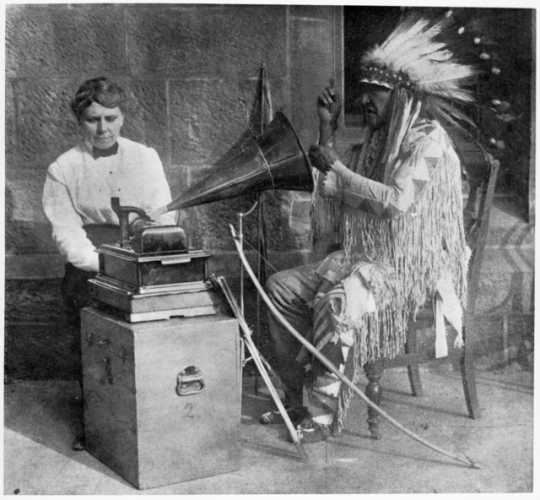 Frances Densmore was an ethnomusicologist born in 1867 who worked until she passed away at 90 in 1957. She travelled across North America, often accompanied by her sister, collecting and transcribing music of various tribes from the Pacific Northwest to the Florida Everglades (Archabal, 1977). She was incredibly prolific, creating over 2,500 vinyl recordings, 200 articles, and 20 books over the course of her career (Archabal, 1977; Levins, 2020). Her writings and recordings were intended to preserve various indigenous music and culture during a time when white settlers were moving onto indigenous lands, and government policy aimed to erase indigenous culture and encourage the adoption of Western customs (Minnesota Historical Society Library, 2020).

Densmore was born in Red Wing, Minnesota to one of the first settler families, across the Mississippi River from a Dakota Sioux camp. As a child she would fall asleep listening to the sound of their drums. Densmore studied piano, organ, and harmony at Oberlin Conservatory, and continued her studies in Boston with Harvard Professor John Knowles Paine (Levins, 2020). She began her studies while continuing to work as a performing musician, by lecturing on Indian music and taking elocution lessons to further understand the pronunciation and inflection of indigenous languages (Archabal, 1977). In 1905, Densmore made her first trip to visit “Indians in their own cultural setting” and began receiving support from the Smithsonian Bureau of American Ethnology to continue her field studies in 1907 (Archabal, 1977, paras. 16).

Densmore used traditional Western notation for her transcriptions and at one point experimented with using graphic representations, which she intended to be used as an analysis of melody concurrently with Western notation. This use of graphs is “one of the earliest experiments with an alternative approach to transcription in the history of ethnomusicology” (Archabal, 1977, paras. 37).  While Densmore acknowledged the limitations of the Western notational style to represent fractional tones and rhythm, she “did not consider the possibility that the fractional tones might themselves be the essential characteristic” (Archabal, 1977, paras. 34). 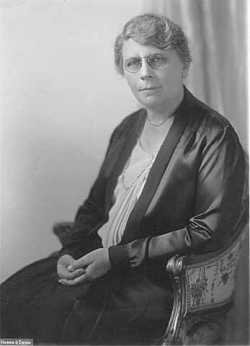 Densmore was inspired to study North American Indian music and customs by Alice Cunningham Fletcher’s work on Omaha music and Fletcher’s collaborator John Comfort Fillmore, who suggested that indigenous people possessed “an unconscious sense of harmony” (Archabal, 1977, paras. 8). Densmore’s earlier ‘transcriptions’ were more like arrangements, embellished “with realizations of what she heard as implicit harmonies” (Archabal, 1977, paras. 33). Over time, she began to question the notion of an indigenous “unconscious sense of harmony,” noting that the Sioux singers’ favourable reaction to her harmonisations seemed to be them trying to please her, rather than liking her harmonies. She first began transcribing songs as unaccompanied melodies in her book Chippewa Music, showing that she “no longer thought of Indian music in terms of harmony” and was becoming “increasingly doubtful of the existence of a universal tonal system,” deviating from earlier theories on indigenous music (Archabal, 1977, paras. 47, 49).

Towards the end of her career, Densmore was quoted as saying about her experience with native tribes: “I never let them criticize the government nor the white race, nor come across with any sob-stuff about the way they had been treated as a race” (Levins, 2020, paras. 25). This statement displays an attitude that was typical for her demographic at the time, though by today’s standards has racist connotations. It may be that after decades of work preserving Indigenous music, Densmore was disappointed that her work would not be portrayed as heroic, as indigenous groups did not eventually assimilate into Western culture as she had expected. “While her early writings are by today’s standards sentimental and patronizing, they nevertheless display a genuine and sympathetic interest in Indians and their culture” (Archabal, 1977, paras. 15).

Many of Frances Densmore’s books are available through our library. You can also search the Smithsonian Repository using the words Frances Densmore to view digitized copies of her works: https://repository.si.edu/discover.